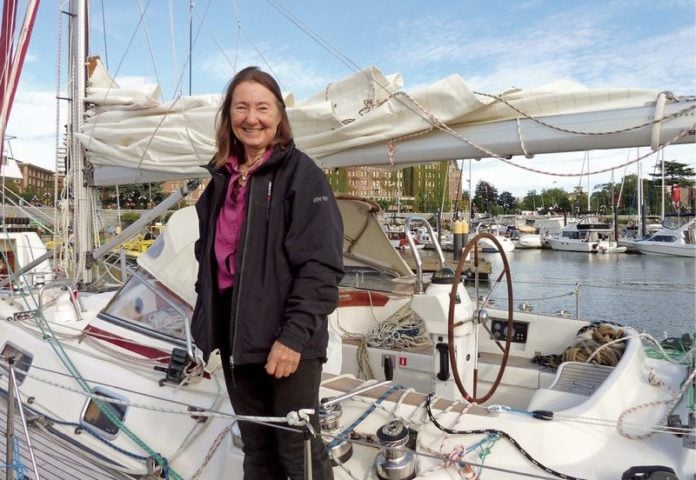 If the summary of Socrates’ story is impressive, the details are astounding. A year before her most recent departure, Socrates fell 15 feet from the deck of her sailboat onto concrete while she was working in dry dock. She sustained serious injuries to her neck and ribs, which forced her to postpone her launch date by a year. The injuries may have delayed her departure, but they didn’t deter her from her goal. On October 3, 2018, she sailed out of Victoria.

The voyage was supposed to take seven or eight months, but the wind gods sent a number of challenges. She’d been at sea for just over 11 months when she finally returned to Victoria, and hadn’t set foot on land in all that time. In fact, she’d only been able to see land for a few days of her journey. To satisfy the official record requirements, Socrates sailed by herself, without any assistance or shore-based support team. Her engine was sealed and inspected upon her return. She carried all the food she needed for the voyage—no provisioning along the way—and her fresh water came from a desalinator which ran off solar and wind-powered batteries.

Socrates did her own weather routing, avoiding storms by using information she gained via radio and satellite. When problems arose—and there were many—Socrates had to deal with them herself, using tools and spare parts that were already on-board. A fair bit of improvising was required. By the end of her voyage, she’d seen damage to her mainsail, backup sail, radar dish and steering system, and her solar panels had disappeared altogether.

I can’t imagine a more inspiring role model, so I asked Socrates if she’d be willing to be interviewed for Island Grandparent. She had already sailed down to Mexico when I reached her, but graciously agreed to speak with me via Skype.

You are a grandmother, and I understand that you keep in touch with your family via satellite phone while you’re away at sea. What do they think of your adventures?

I have three grandchildren in England: my grandson is 14 and my two granddaughters are 16 and 18. They came down to help me name my boat back in 2009. It’s the SV Nereida, named after the Nereids, the handmaids of Poseidon (the Greek god of the sea). My son follows my blog and my grandson is interested in what I’ve been doing, but they aren’t sailors so I don’t think they really understand what I’ve been getting up to.

You must be aware that you’re a role model, both as a woman and as a 77-year-old. What role does that play in your decision to take on such big goals?

It doesn’t affect my intentions, but it’s certainly very nice. It makes me feel that I’ve achieved something, that I haven’t been completely selfish. I love hearing that I’ve encouraged other people to try to do something.

Were you born brave, or have you become more courageous over time?

I don’t feel I’ve been particularly courageous. It’s about experience: the more you do, the more you find you can do. My first solo overnight sail was from Colón in Panama north to Providencia. The conditions were bad and the weather forecaster was telling me to abort and go back, but I was already committed. It was an exhilarating experience to arrive in one piece. My confidence was really boosted by that. Now I’ve come to know what to expect. I have total confidence in my boat; it’s pretty difficult in the middle of the ocean for the boat to sink under you. When conditions are deteriorating, I stay calm and keep safe by doing what I have to do.

You’ve survived a number of serious setbacks and losses along the way: the death of your husband George from cancer in 2003, the loss of your first boat in 2008, and a nasty fall in 2017. Where does your resilience come from?

My father died when I was five weeks old, and my mother struggled to bring me up. I was in an orphanage from age five to nine as a result. I learned pretty early on that if I wanted to achieve anything I had to make it happen myself. And I think there’s some determination in my genes. My mom’s sister lived in New Zealand and was a very go-for-it person. And when my mom joined a seniors’ group in her latter years, she would march right at the front, leading.

Do you feel changed by each adventure?

I certainly changed initially, as I got more confident. Each little step is actually a big step. You find that you’re coping, and so you keep taking bigger steps. Now an ocean crossing is almost nothing. It was a big thing initially, but I don’t really think much about it now.

I’ve got a literary agent in London waiting for the first pages of my book. And the Cruising Association of England is flying me back for their 2020 Flag Officers’ Lunch, so I’ll be able to visit my kids and grandkids. But my next big trip is touring Australia for four months in a motorhome.

Where is home now?

Theoretically it’s in Britain, but I’ve been in B.C. so much and I’ve got so many friends and so much support here that I call B.C. my home-from-home. I’m happy to be adopted as a Victorian!

Get to Know Nanaimo & Area

See the Sights in the CRD