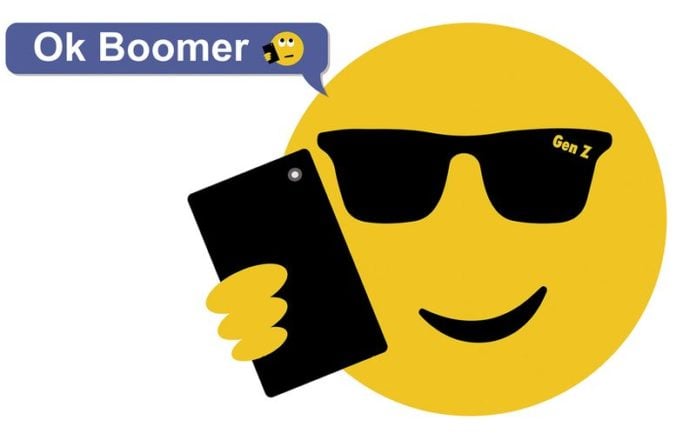 I suppose that I shouldn’t have been surprised when I overheard my 10-year-old granddaughter and her friends use the phrase recently as they discussed a rule that an elderly teacher (actually, one not quite my age) had imposed at school.

After all, the refrain had spread like wildfire in our ever-connected world and, given that my granddaughter and her friends are no strangers to social media and are surrounded by older pre-teens and teenagers, it was bound to happen.

Still, even though I’m relatively certain that they don’t have any deep understanding of the collective eye-roll that the phrase represents, I’m pretty sure that they have an instinctive understanding that it’s a way of delivering a verbal eye-jab to an older generation.

And as much as I struggle to contain my innate tendency to step up to lecture anyone using the phrase about their need to respect their elders and realize that they would be better served by listening to some of the experiences of the boomers they dismiss, I realize that initial reaction to be a mistake.

I have, instead, been thinking, with a weird sort of fascination, about the fact that our society keeps getting the same things wrong.

Today’s youth, at least some of them, are convinced that the tastes, values and lived experiences of baby boomers have little value to their world and that the ills of society—everything from climate change to racial injustice to the unfair distribution of wealth—are the fault of boomers.

The funny thing is that boomers once espoused the same sort of views.

We were convinced that our elders could never understand our positions on civil rights, wars (the Vietnam War at the time), women’s and gay rights and, in general, a counter-culture approach to addressing those challenges.

As teens (myself included), the boomer generation pushed social conventions about dress, sex, drug use, music, and general decorum to make our point.

We questioned materialism and conspicuous consumption, never realizing that it was the postwar economic boom that allowed us the freedom to do just that.

But in doing all of this, we made the same mistake that today’s teens are now repeating.

Climate change, economic disparity, social and political problems are not the fault of an entire generation. There are lots of boomers (again, myself included) who are just as upset about climate change, for example, as Greta Thunberg and are just as passionate about trying to address that existential challenge to mankind.

What we were fighting, and today’s teens should be standing up against, had more to do with power than age.

In fact, by highlighting age we made the same mistake that teens are making today.

Make the mistake of pitting one generation against another and the discussion about power will get lost on a narrative about a generational gap.

A better approach for teens, and one that’s a lot tougher to understand and act upon, is to realize that the very boomers they dismiss can be their greatest allies.

At the end of 2019, Greta Thunberg, did just that when she spent time talking to, and listening to, David Attenborough, the 93-year-old icon of journalism and environmentalism.

She realized that it wasn’t an older generation with whom she had a problem, but those in power who were sending us into an unimaginable future if climate change is not addressed.

As boomers, we made that mistake.

Ironically, it was Peter Townsend’s ’60s anthem that might still offer the best advise to today’s teens.

Just a little advice from a boomer.

A Goody Two-shoes’ Guide to Keepin’ It Cuss-free

I can’t trace why, but I’ve never been much of a swearyface.Where many teens or twentysomethings, already educated in expletives, escalated to coffee (or...
Read more
Behaviour

Don’t Just Do Something, Stand There

At times, the most powerful action you can take is to do or say nothing. Take a moment to think about the last unfavourable...
Read more
Behaviour

“No! da yewo pwate!” screeched two-year-old Katie as she knocked the plate off the table, sending apple slices everywhere, crying so hard that she...
Read more