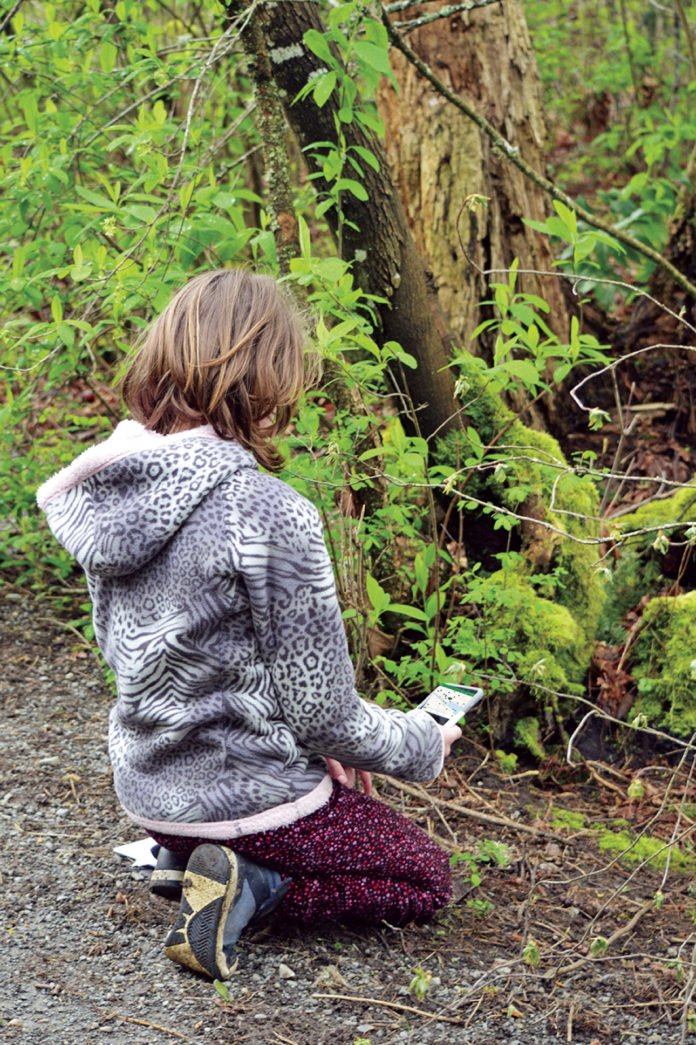 When I was 16 years old and earned my Novice (N) driver’s license, I got my first cell phone. With an N, you can drive by yourself and my parents wanted to make sure I had a way to contact them if something happened or to let them know where I was (definitely never at a party!). It was a flip phone and I would take it out randomly to flip it open and then close it with a flourish. Nowadays, I have a smart phone, which just doesn’t have that same flair. But I still have my phone with me whether driving or out walking at a regional park.

As a Park Naturalist with the Capital Regional District, I hear people say they want to escape from technology when they go out for a walk. They want to be free from constantly checking their phones. I enjoy that freedom also but I believe there’s a place for technology in nature as well.

Using the airplane mode setting means you won’t get that call from your partner about what to grab from the grocery store or from your teenager asking if they can borrow the car or from constant social media notifications. While airplane mode allows you to avoid interruptions, there are still plenty of ways you can use your phone without Wi-Fi or data to explore nature.

There are numerous apps for identification of plants and animals. You can narrow down the species through size, colour, location, or date of sighting. There are apps for butterflies, trees, mushrooms, mammals, and birds. There are even apps for animal tracks and scat so if you don’t see the animal itself, you can still figure out what it might be. If you find a print without claw marks, for example, it might be a cougar since wolves and bears have claw marks in their tracks.

There are countless apps for bird identification. Most include pictures of the male and female birds, their calls or songs, and maps of their breeding or migratory range. The Cornell Lab of Ornithology’s Merlin Bird ID app is currently on my phone because it’s free, easy to use, and can focus on the birds in the northwest region of North America. It’s super handy to have on your phone while out on the beach or in the forest.

If you’re out on the water or on a beach, there are even apps for cetaceans (whales, porpoises and dolphins) and sea turtles. There are 23 species of cetaceans and four species of sea turtles in the waters off B.C.’s coast, 12 of which are under the Species at Risk Act. When you see a blow, or a fin, or a tail fluke, you can (try to) take a picture and record the observation in the app.

When back in Wi-Fi or data mode, you can post pictures and ask experts for help in identification, such as with the iNaturalist app. Some apps report your sightings to the naturalist community and you can see where biodiversity hotspots may be, such as Island View Beach Regional Park. Others, such as the BC Cetacean Sightings Network’s Whale Report app, report the sightings to scientists and researchers, letting them know where and when these animals are travelling, enabling them to identify areas for further protection.

Before you head out to explore a regional park, downloading a map is a smart idea. The CRD website has maps for all the regional parks and trails and identifies parking, shelters, washrooms, viewpoints, and accessible trails. These maps are also geo-referenced and show colour coded trails, trail distances and designated uses. They also offer optional content. This feature allows layers showing individual trails and trail designated uses to be turned on and off, and thereby enhance the map’s functionality. By downloading maps to your phone in advance, you will have easy access when you need it in the park without using data. This is very helpful in not getting lost!

As with many things, cell phones can be good or bad depending on how you use them. I used my first flip phone for emergencies (is pizza considered an emergency?) and use my current phone for much more. When walking in nature, putting away your phone can be a good thing. Bringing out your cell phone to help enhance your nature experience? Also a good thing.