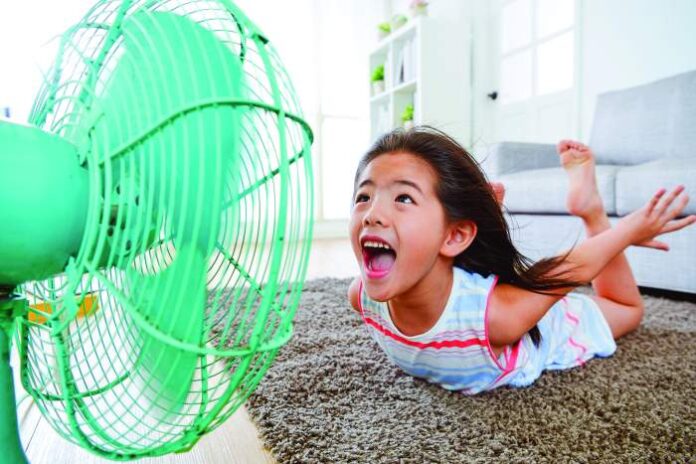 As we begin to wrap up summer and start thinking about fall, long gone may be the memories of B.C.’s Heat Dome™, which broke records and caused many deaths, but a) summer’s gonna come around again, and b) summer weather seems to be lasting longer and longer.

I reckon that, especially during this most recent heat wave, we all came away with some new ways to keep cool, and I’d like to share some of what I learned, for the comfort, health, and safety of you, your littles, and your furbabies, too.

First, if you or your littles have a throbbing headache, strong pulse, red/hot/dry skin, nausea/vomiting, and aren’t sweating, these are signs of heat stroke, and folks smarter than me say that that is the time to call 9-1-1, doing what you can to keep the person cool until help arrives.

I wandered into my local hardware store, and was greeted with literal retail islands made up of fan boxes. Clearly, the stores were somewhat prepared, but when panicking humans (and sheistery humans; did you see some of the inflated prices on the used market?) get involved, no preparation is enough.

So, I chose from a wide selection of fans, and brought a nice, new, sleek black tower fan home.

Two days later, while in the same store for some bug spray, tumbleweeds were blowing by where literally hundreds of fans stood previously.

However, I received a hot tip from a friend that hydroponics shops are often underrepresented in the fan-selling lore.

Indeed, after zipping out the moment the intel came in, I was surprised as all get out to see…well, not islands’ worth of fans, but many stacked boxes, sized from clip-on-your-desk size to full-on installable AC units. I got a sweet little 9″ industrial-strength floor/table fan for myself, and one for my mother, who was suffering through the rising temperatures.

Word got out, and they were sold out before they closed.

On the first day the thermometer hit ridiculous degrees, I did what I’ve long done, and set up my window fan in a half-open bedroom window, with the air blowing out. The reasoning being that the hot air would be blown out, and the cooler air would come in through other windows.

NOT SURE WHAT I WAS THINKING THERE.

If you’re lucky enough to have one of those neck cooling bandanna wrap thingies on hand, count yourself lucky. Lay that sucker on a little water in a dish, let its hungry little polymer beads suck up the water, place it around the back of your neck as you forge out into the heat, and its slow release of refreshing water is sure to help keep you going in the sun.

If you’re not…my BFF introduced me to the fridge towel. Quite simply, a fridge towel is a small towel or large cloth which you pop into a bowl of water in your fridge overnight. You can then bring it out and place them on your face, your head, your neck, your back, or wherever else you need relief.

Or, roll one up and tie it around your neck to mimic a neck cooling bandanna wrap thingy.

Of course, the simple pro tip is to have a number of fridge towel friends in circulation.

Both internet doctors and real doctors have told me that sunscreen should be reapplied every two hours. Sooner if you’re active, sweating, or swimming. I made the switch to a spritzy spray-on sunscreen a few years ago, and am thankful I did. No more looking like a ghost if you squeeze out too much and don’t feel like spending an additional 27 minutes rubbing it all into your skin.

Another personal tip I’ll share with you is to keep your eyes on your eyebrows. Give ’em a wipe on the reg, lest your sweat carry the sweet, sweet sting of sunscreen into your precious eyeballs. (SFX: SCREAMING)

Finally, for those of us with four-legged children who don’t speak, and who are zipped into fur coats they’re unable to extricate themselves from, The Dome™ was a doozy.

Instagram, of all places, was a great source of advice from fellow furparents. Here are a few I found helpful:

• Take walks when it’s cooler: earlier in the day, or later in the evening. Not only for cooler ambient temperatures, but for cooler pavement.

• Place your hand or bare foot on sun-exposed pavement for five seconds before you head out. If you can’t take the heat, it’s likely the pads on your four-legged friend can’t, either.

• Avoid the asphalt, and keep to grass or trails when you can.

• Bring water they can drink from or, if you’re lucky enough to have water spots along your route, go there.

• Back home, petting your pet with a fridge towel around your hand is a good way to give them some moisture which will evaporate and subsequently cool them down. Special attention to their paws, the backs of their necks, and their ears. Heck, for cats, it’s like getting a bath like when they were kittens!

• Place an ice pack under their bedding, or a blanket they like to lie on. This worked like a charm.

• And, like the warnings at the beginning of this article, if your cat is panting, vomiting, stumbling, and has a rapid pulse, work fast to cool them down and bring them to a vet or animal hospital right away.

However you deal with the heat, stay safe. The big ol’ skyball is great and everything, but sometimes, it doesn’t know its own strength.

A Positive Outlook for a New School Year