More
islandparent Parenting Motherhood The Art of the Apology
ParentingMotherhoodWell-being

The Art of the Apology 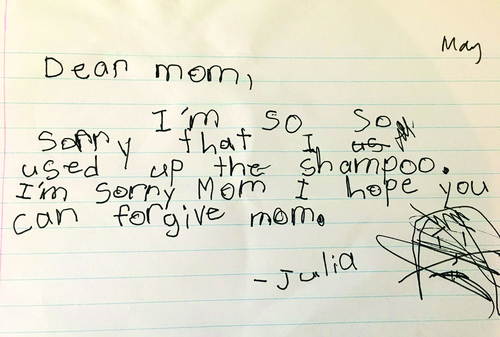 As a big fan of the handwritten note, I was touched when my nine-year-old daughter first came to me with a written apology. It read: “I’m sorry for the way I behaved. I hope you can forgive me.” I clutched the note to my chest and smiled with the pride of raising a child who is so considerate and reflective. It was a dozen or so apology notes later when I realized we had a problem.

While I was impressed with my daughter’s ability to offer a heartfelt apology after an outburst, they were coming in at an alarming rate. I knew that it was time to push back my sleeves and address the behaviour that required the apology. But before I could get to that, I needed to offer her an apology.

After a particularly challenging day, I was tired and just wanted to get to the oasis of my couch and Netflix. My daughter was refusing to move the bedtime routine along and, in my anger, I pinched an arm to get her attention. It worked. I had her attention, but I had also inflicted pain that brought her to tears.

I returned to her room after spending a few minutes pacing and deep breathing to calm down. I was in the middle of my apology to my daughter when she said, “Mom, you used the word ‘but’ and you always tell me not to use that word in an apology.” I was about to tell her that my ‘but’ was beside the point but she was right: I was giving her my excuses and reasons for hurting her instead of apologizing for it.

It seemed that my daughter understood how to offer an apology while mine needed some work. On the other hand, she appeared to have no intention of correcting her behaviour while I was determined to find more mature ways to discipline than pinching.

I found a podcast with Dr. Brené Brown and psychologist Dr. Harriet Lerner discussing her book Why Won’t You Apologize? I was intrigued when the author shared her research that showed the number one reason children become adults who don’t apologize is because their parents didn’t simply say “Thank you for the apology. I appreciate it.” Dr. Lerner says that when a child approaches a parent to apologize, “the parent unleashes an ocean of criticism.” In that situation, she said offering an apology is going to seem like a mistake and a futile process to the child and they are likely to avoid it in the future. I certainly had been guilty of this.

It also made sense to learn that one of the most common reasons parents don’t apologize to their kids is because they fear doing so will reduce their child’s respect for their authority. If we just let our kids apologize without discussing the behaviour, aren’t we being permissive?

Dr. Lerner believes that the opposite is true; a heartfelt apology offers emotional safety in the parent-child relationship. The learning comes from the conversation at a later time when both parent and child are calm. After all, no one is really open to feedback when they feel criticized and defensive.

I learned that according to Dr. Lerner, there are nine factors that make up a heartfelt apology and I was doing none of them. The one factor that really stood out to me was that if the word “but” appears anywhere in an apology, you aren’t offering one. Rather, you are giving your reasons, justifiers and excuses instead of owning your part. A true apology is about owning your actions and is intended for the other person. It does not sound like “I’m really sorry that I pinched your arm, but you were being a real twerp.”

Likewise, my daughter needed to learn another of the other factors that Dr. Lerner identified: An apology “needs to be backed by corrective action.” It’s what was missing in my daughter’s apology notes. In order to truly apologize, one needs to be able to reflect on what they can do in the future to avoid the same hurt in the relationship. I’m no expert in child psychology, but I can tell you that I had yet to observe self-reflection in my child.

Real-life is messy. As parents, we don’t always behave in ideal ways and our children certainly don’t. No one wants to think of themselves poorly, so when we’ve hurt someone, it’s natural to want to ease that discomfort with reasons that justify our behaviour.

With kids, this often sounds like “but he hit me first!” or “but he called me stupid!” I don’t know when “personal accountability” as a concept can attach to children’s developing brains, but it seems to me that until my daughter’s frontal lobe develops, there will continue to be a steady stream of notes coming my way.

In the meantime, I hope that modelling how to receive and offer an apology in a heartfelt way with my children will teach them to be accountable for their behaviour in a way they can understand. And since you can’t go around pinching people without having to apologize, it’s worth the effort to learn how to do it well.

How Kids Use Social Media Impacts their Well-being

The Saving ‘Grace’ of the Redo