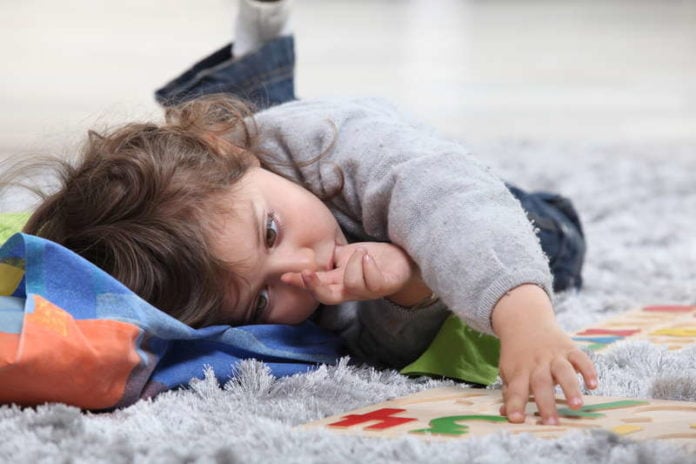 I’m a parent who traded a good night’s sleep for my children’s self-soothing habit—thumbsucking. I got them started but it took a worm to get them to stop.

Who wants to wake up at all hours of the night to repeatedly replace a soother into an infant’s mouth? I didn’t. Thumb-sucking seemed more natural, a form of self-soothing that was supposed to translate into a calmer baby and more sleep for me. So I encouraged it. What I didn’t realize was that breaking the thumb-sucking habit would take years and push all of us to our limits.

Hungry for help to undo my mistake, I searched the Internet. “How much do braces cost?”…“Does restricting self-soothing cause childhood anxiety?” Friends told us our kids would grow out of it. Once they reached school age and became self-conscious, the habit would naturally end, they said. Other people recalled reading about children who sucked their thumbs well into their forties.

So, we tried everything to break the habit.

We used the paint-on varnish that makes Buckley’s cough syrup taste like a Pina Colada. We taped socks onto my daughter’s hands with duct tape in the evenings. It seemed like a good idea, but proved problematic when she had to use the washroom during the night and couldn’t use her hands. More precious sleep lost.

Sticker charts? You bet. Rewards? We did that too. In fact, once after my daughter went five days without sucking her thumb, I bought her a pair of heeled white shoes that she wanted. My value for sleep was clearly higher than my values for age-appropriate footwear.

When I caught her sucking her thumb a week later, she told me she didn’t want the shoes anymore and I could take them back. Apparently her self-soothing addiction was stronger than her desire for high heels.

I bought a book called David Decides About Thumb-sucking, about a boy who decides that he no longer wants to suck his thumb. But my kids “decided” that quitting wasn’t for them.

We tried hypnosis and counselling. We spent hundreds of dollars replacing the oral habit with fidgets. We tried gum to give Julia the oral stimulation that thumb sucking gave. I convinced her Grade 2 teacher to allow Julia to chew gum in class. It kept her thumb out of her mouth, but wrecked her social life. The other kids resented her special privileges. After the first week, the teacher requested that she be able to manage the gum consumption because Julia had blown through a whole pack before recess.

Our last-ditch attempt was a dental appliance called “the crib.” A friend told me this was “the” solution to our oral stimulation situation. An appliance gets cemented to the child’s teeth and gives the thumb a stab every time it’s inserted into the mouth.

After consulting with an orthodontist I was crestfallen to learn that children find ways to suck their thumb even with the crib in place and, worse, once it is removed, they continue thumb sucking.

My kids were 5 and 7. I was sleeping at night, but I was still exhausted and out of ideas.

The cure came late one night when my son cried out and I was unable to calm him. He complained of an itchy bum. I remembered the notice from his teacher that someone in his class had pinworms. Back to the Internet I went.

I learned that the female worms crawl out of the anus at night and lay their eggs on the outer skin. The infected child then scratches his bum and because the eggs can live on surfaces for 14 days, they then get transferred to toys, shared crayons in the classroom, door handles and if you are a thumb-sucker, into your mouth.

Was that too much information? It gets worse.

With my head lamp strapped on, I went exploring. I found a tiny white worm crawling out of my son’s rear, and that was it. I was officially done with thumb sucking.

In the morning, I told my children that Nathan got worms because he sucked his thumb and we were no longer going to suck thumbs in our house. Period.
We all took deworming pills, washed our hands fastidiously and laundered every stuffy, blanket and piece of clothing. We made a 30-day chart with a reward at the end. I didn’t care about the price. It was going to be worth every penny if it worked. At night, we wrapped their thumbs in medical tape and after three weeks, we didn’t need the tape again.

I am proud to say we are now 90 days thumb-sucking free.

I can tell you that out of all of the things we tried, the most effective solution was simply my determination to break the habit. That tiny worm who came out at night and interrupted my sleep was my personal wake-up call.

Sarah Seitz is a working mother, wife and writer. She spends her free time cutting off crusts and uses good coffee and humour to get through the day.

Much Ado About Midriffs

The Challenges of First-time Parenthood

How to Create Community & Tend to a Village