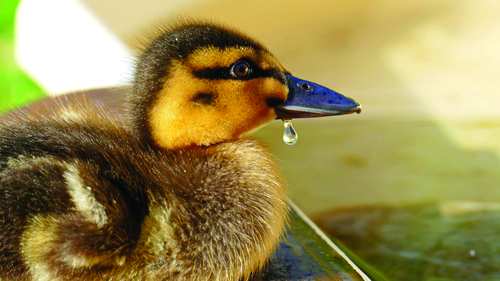 Our family lives not too far from Bowker Creek. We pass over its hidden waters or walk along its concrete banks several times a day without thinking much about it—at least until this year.

Bowker flows from its headwaters near UVic through Saanich, Victoria and Oak Bay on its way to the ocean. The creek was once home to runs of coho and chum salmon and cutthroat trout, shaded by arbutus trees and bordered by camas meadows cultivated by the Coast Salish peoples. Over the decades, the urban waterway has been buried beneath asphalt and rerouted down culverts, until Bowker is more of a “cyborg creek”—half nature, half machine.

In recent years, some of its original flow has been restored. The section closest to our home has been stripped of wire fence, seeded with native plants and allowed to meander through rock gardens and past an outdoor classroom near Oak Bay High.

When our kids were young, we would toss duck food to the mallards and widgeons that gather in an eddy pool downstream. It was our one sure-fire “nature encounter” in the city. Once our kids grew older, we barely glanced at the creek as we zipped past on our bikes to school or ball practice or the beach.

During the season of COVID-19, we’ve all had to stick closer to home. The global pandemic has disrupted families everywhere, so we seek silver linings on the storm clouds scudding across our newsfeeds. The excuse to slow down and pay attention to our immediate surroundings has been one such boon. I’m sure it has for other families, too.

A stroll along Bowker has been a reminder of our good fortune in anxious times. Unlike some countries, our kids were never quarantined indoors for weeks or even months. Unlike some cities, we’ve got tree-shaded parks and paths to restore our Zoomed-out brains. Unlike many places, our public-health leaders have kept a crisis from spiralling into a calamity.

This spring, with other activities suspended, our family walked the Bowker path with wide eyes again. We noticed mother ducks leading large broods of fuzzy newborns in the shallows. The creek echoed with their peeps.

Even urban nature, though, isn’t a TV show edited for PG-rated viewing. One morning, I was walking with our 12-year-old daughter when we spied a duckling separated from its mother and six siblings. It peeped and peeped; mom quacked back. The tiny duckling had to ascend a narrow wooden ramp to overcome a concrete dip in the creek and return to her brood.

“C’mon!” we quietly encouraged the plucky fuzzball. “You can do it!”

Instead she paddled in the wrong direction. Then out of the shadows of an overhanging tree, a large crow dived straight at the duckling and…well, let’s end the scene right there.

“That’s 2020 in a nutshell,” I thought gloomily, as we continued our stroll in a state of shock.

But our dour mood didn’t last. If anything, the incident reminded us not to take special moments for granted. As spring gave way to summer, we kept returning to the creek. Yes, the broods dwindled; our daughter learned that survival rates for ducklings are not exactly great.

By summer, though, we could distinguish several duck families, each with two or three siblings, snuggled in the high grass or dunking their heads to feed. They were becoming hardy teenagers, it seemed, as their fuzz gave way to feathers.

We’ve been living through a strange season in which we’ve all felt vulnerable. Still, as Dr. Bonnie Henry has reminded us, “It’s not forever, but it is for now.” And so finding small, transient pleasures in the “now”, like our daily duck check-ins, seems especially important.

“Everything flows,” another wise philosopher once said. Change is inevitable, the good and the bad. Some bends in the creek of time will be darker and rockier than others. But if we stay positive and stick together—even when we must stand apart—we’ll all reach open water soon enough.

Live Green in Your Yard & Garden This Summer

NATURE SKETCH with the Bateman Foundation