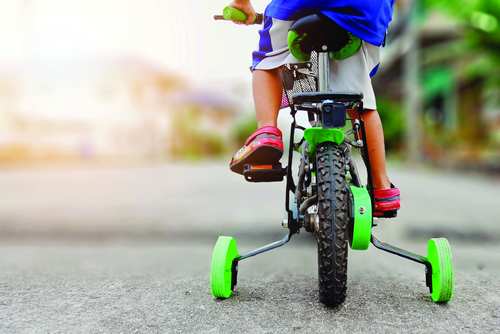 When your friends and acquaintances have kids the same age as yours, a common topic of conversation is whether or not said kids have met their developmental milestones. My kid can stand up unassisted, can yours? She’s feeding herself—is he doing that yet? He’s finally toilet trained, is she?

When many of your friends have kids your own child’s age you start to get a good sense of what milestones yours “should” be meeting. At least if you want to stop receiving pitying looks whenever someone compares their child to yours.

On an ASD Facebook group recently, a mother asked for strategies for toilet-training her two-and-a-half-year-old with autism. Her daughter didn’t seem to know when she was peeing and had no interest in her potty. What could be done to change this? Since many neurotypical kids are toilet trained at that age, I had a pretty good idea of why this mom was feeling desperate. I’ve been the only mom lugging diapers to a playdate, sitting with said diapers as the other moms compare how torturous their 48-hour epic toilet training journeys were.

When Angus was two-and-a-half-years-old, we started toilet training also. I followed the same program that worked for every single other child in our baby group, the program all the other moms said took a weekend, a week tops for particularly slow learners. It was not a success. Angus ran around the house for days wearing only his superhero underwear, not even pausing as pee streamed down his legs. It took a lot of floor scrubbing, and Googling, and worrying about my inadequacy as a mother before I admitted my child was just not ready to toilet train. He wore pull-ups until partway through preschool. But though it took a little longer than average, eventually he got there.

The take-away for me was that Angus would reach his normal developmental milestones. At his own pace. Trying to help him learn a new skill was worthwhile. So was quitting the teaching when it became clear he wasn’t ready for it. What wasn’t worthwhile? Worry, self-flagellation and endless time spent reading (and taking) advice of online, self-appointed, mommy-experts. But patience is hard. Something those of us who know it’s the best strategy still have trouble taking our own advice. Which leads me to the bike…

Angus took to his strider-bike a little slower that many kids, but not that slowly. Soon he was whipping down the sidewalk, not worried about bumps or hills. His first friend to graduate to a peddle bike did so at three. His mom claimed it was easy to move from a run-bike to a pedal bike, since her son already had mastered balance.

“Less than a week,” she said. “And no need for training wheels.”

By that time we had learned that Angus would take longer than many of his friends to learn skills that tested his physical prowess. And he was quite happy on his strider. We bought him a peddle bike for his fifth birthday. A bike with training wheels. Then Mike and I took turned bending over and pushing the pedals down with his feet over and over as we propped him upright. We didn’t give up, though the lessons became less frequent as our backpain increased.

A couple months later we signed him up for a week of private classes. His 19-year-old instructor had way less trouble bending, and by the Friday he could pedal a few feet on his own. But it was hard, and not fun. The moments of success didn’t provide much incentive to keep trying.

We wheeled the bike into the living room. We have very little space, but I wasn’t worried about Angus knocking anything over. Mostly I wanted him to become comfortable clambering on top of his bike. When his friends came over, I put the bike in the bathtub. No way was I going to let an accomplished cyclist tear around the house.

After a few months we took off the training wheels and replaced them with a handle, which eased our back pain considerably. We bought him a scooter so when we were camping with friends he could still zip around on a wheeled contraption with the other kids. We kept trying the bike every so often, but it wasn’t a hit. And as he grew, it became increasingly challenging as his knees were close to the handlebars.

This summer Angus’s granny bought him a new bike for his 9th birthday. It was two sizes up from the last, and way lighter now that steal-framed bikes are no longer the norm. We transferred the handle onto the new bike and zoomed him around his granny’s yard. The second time we tried it, he could successfully bike across her yard unassisted. He couldn’t get started on his own, and he stopped by crashing into things, but he could turn the pedals while staying upright, which was amazing enough.

Just a month later, he could stop, start, and turn circles. Four years after his first bike, he was officially a cyclist.

I am not a patient person. If there is a reason we end up with the kids we do, a lesson that we are to learn from them, “patience” is what Angus is working to teach me. For some of us, certain milestones will take our kids much longer than they take their peers. That’s okay. The wait only makes the achievement that much sweeter.

Laura Trunkey
Laura Trunkey is the mother of the amazing Angus and the author of the story collection Double Dutch. Contact her at laurajtrunkey@gmail.com.

In October, Jana O’Connor, a pediatric speech-language pathologist and mom of an eight-year-old with ADHD, went viral. A series of 20 tweets she posted...
Read more
Health

Don’t keep your kids in the dark As scary as this all feels for adults, it can be even more frightening for kids. Children...
Read more
Active

We parents have our work cut out for us.How do you juggle working from home with parenting without support? How do you continue your...
Read more