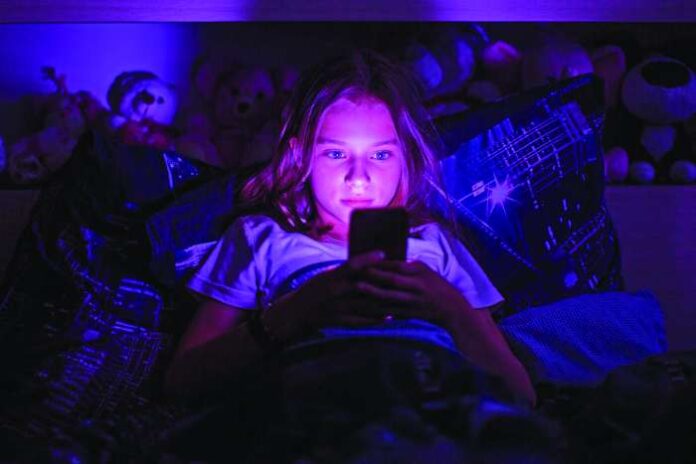 The University of Glasgow researchers who developed the Index of Nighttime Offline Distress, or iNOD, believe it is the first psychological measurement tool of its kind, which reflects the realities of how young people interact with each other in an online world.

The 10-point questionnaire, developed after consultation with 3,000+ young people, aims to equip clinicians, teachers and parents with accurate measurements of the impact of late-night social media use on sleep.

Previous research from the group has shown that teenagers who use social media for five hours or more a day are more likely to report problems with their quality of sleep.

The development of iNOD is outlined in a new paper published in the journal Sleep Medicine. Dr Holly Scott, a lecturer at the University of Glasgow’s School of Psychology, is the paper’s lead author.

“It’s not unusual to hear parents and teachers expressing concern about the amount of time that young people spend on their mobile phones,” says Dr. Holly Scott, a lecturer at the University of Glasgow’s School of Psychology and the paper’s lead author.

“As young people move away from their families and begin to strike out on their own, staying in touch with friends becomes more important, as does maintaining a feeling of connection,” adds Scott. “No one wants to feel they’re missing out … phones and social media give them an unprecedented ability to extend the feeling of face-to-face connection.”

In developing iNOD, the research team set out to create a measurement system which was built from the ground up to reflect the real-life experiences and opinions of modern young people. The aim was to get a truer sense of the trade-offs young people make between social connections and night-time social media use, and to determine where it can begin to impact on young people’s sleep.

While a considerable proportion of respondents claimed not to have difficulties in disengaging from social media, the responses also showed that extended wakefulness in bed before attempts to sleep was a typical experience for many. Those young people who did spend longer than they intended on social media at bedtime were also more likely to report delayed sleep onset, short duration and poor sleep quality.

The researchers used the survey responses to develop the 10-point iNOD questionnaire, which allows young people to self-report on their experiences of social media and sleep.It captures feedback on two factors that respondents reported as particularly important – “staying connected” to peers via social media and “following etiquette” by continuing interactions into the night. Those who scored higher on Staying Connected and Following Etiquette tended to get into bed later, took longer to close their eyes for sleep at a later time, but did not differ in their wake times. They also tended to use social media for longer in bed and after the time they felt they should be asleep. They tended to have shorter sleep duration and poorer sleep quality.

“Young people need quality sleep,” says Dr. Heather Cleland Woods, senior lecturer at the School of Psychology and co-author on the paper. “But they also need the interactions with peers that social media provides, especially during a pandemic. Our aim is that iNOD will be widely adopted as a tool to help parents, teachers and other adults with caring responsibilities have informed conversations with young people and each other about device use and sleep.”

“We’ve already done some work with government to help develop better evidence-based policy for young people, and we’re keen to explore further how iNOD can be integrated into high-level understanding of the lives and concerns of today’s young people.”

The Pursuit of Their Own Normal

Mama Gets to Ask 3 Questions