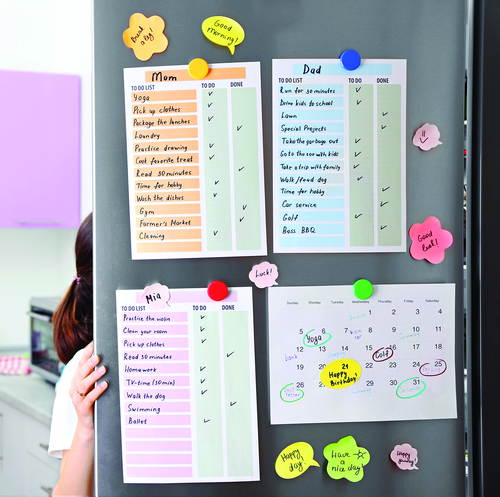 My kidlet likes a schedule.

I’m ruled by time, with alarms for everything from taking out the recycling to not forgetting to eat ice cream as a reward for that thing I did six hours ago when I set the alarm.

I’d prefer to be a bit more relaxed with my days’ happenings, but my brain’s always looking ahead to the next thing. It just HAS to know where I am on the timeline. Too much gaming, perhaps?

Perhaps it’s hereditary, perhaps it’s anxiety, perhaps it’s . . . *gestures* ALL THIS…but my little prefers to know what’s ahead in her day-to-day. How does it go? “Nature vs nurture?” I promise I didn’t intentionally influence it. But it sure looks like my doing.

Of course, she’s not against a surprise on principle. But unexpected changes in schedule have led to frustration in the past because, as I see it, she’d already built out the day’s schedule in her brain.

Thus, as we begin our mornings and afternoons and evenings, I lay out (and later, remind her of) what’s to come.

I try to give 10- and 5-minute warnings before we switcheroo from thing to thing. This seems the perfect comfort to the way her brain works. It’s taken a bit, but it feels like I’ve hit the sweet spot of preparation and communication.

A calendar on the fridge is another useful tool. A week, or month, at a glance can help mentally prepare anyone for what’s ahead.

I reckon that our situation is sliiiiiiiiightly more regimented than that of the average 11-year-old’s concern for time. I know there are many kids out there who are less interested in knowing what’s ahead (possibly to the frustration of their parents). I also know there’ll be some who require hourly updates or more (refer back to frustration).

I used to wonder what I could do to “fix” this. But, with all the world’s problems, I’ve come to accept that this probably isn’t the thing I should be dedicating heaps of worry to. Is it so bad that she likes order? No.

So long as she can function day-to-day without exploding, roughing out her days isn’t the worst anxiety she could manifest. Though, of course, a close eye is kept on it to see that it doesn’t spiral into other issues.

I’ve come to realize that it’s probably half about time itself, and half about control. She’s not a daredevil (except at the pump track). She’s not a rollercoaster kid. She’s not a move fast and break things type. And that’s just fine. That’s why it’s wonderful that there is balance in the world.

There are other kids who’ll eventually go bungee jumping or ride motorcycles or tame lions. Maybe mine will end up taking photos of their antics, or writing stories about them.

Or maybe, she’ll click one day and jump right in with the daredevils.

Perhaps she won’t be cautious forever. But, if she is, it’s not a detriment to her or the world.

The Balancing Act of Budgeting